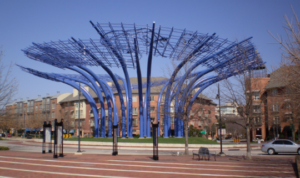 Have you ever seen the large blue sculpture in the middle of Addison Circle and wondered..well, what is it? Or maybe, you are so accustomed to driving by it every day you have never really given it much thought.  Either way, there is probably quite a bit you don’t know about our city’s most iconic landmark.

So what is the large blue thing? Short answer: “Blueprints at Addison Circle”. However, there’s a lot more to it than that. Blueprints was the city’s first piece of public art. Created by masterminds Mel Chin and Micheal Van Valkenburgh, the sculpture took over 18,000 man-hours, 400,000 pounds of steel, 600 gallons of custom blue paint and 7 years to create. The idea for Blueprints came at the same time Addison Circle was being developed.

City members and developers decided they needed an “exclamation point” to top off their new and revolutionary development. In conclusion, it was agreed upon that a giant piece of art was it. The town created a committee to find the most qualified artists from all over the world. In the end, Chin and Valkenburgh won out as a team and created the gorgeous blueprint sculpture we have today.

Having more knowledge of our city’s first piece of public art might just be enough to make you drive around the circle for a second look. Oh, and if you are wondering where the name comes from, just look up to see the details of Addison Circle’s original blueprints forever embedded in the top of the sculpture.